Illustrative image, source: the Houthis media wing | On August 4, the Houthis (Ansar Allah) released a video documenting operations which were recently carried out by their sniper units. | Houthi snipers hit five Saudi-backed Yemeni fighters and five Sudanese service members on the border line with the southern Saudi province of Jizan. Along the border line with the Kingdoms' southern province of Najran, the snipers targeted a Saudi-backed Yemeni fighter and destroyed two surveillance cameras, which were installed in f…

ecns.cn (2021-08-05). U.S. closure of Fort Detrick lab not coincidental: expert. ecns.cn The sudden shutdown of the Fort Detrick lab in the United States and the pneumonia outbreak that followed are far from coincidental and should be studied in the scope of the ongoing investigation into the pandemic's origins, a Russian political observer has said.

ecns.cn (2021-08-05). Why investigating U.S. EVALI outbreak important in COVID-19 origin-tracing?>. ecns.cn Amid global efforts in tracing the COVID-19 origins, the connection between the coronavirus and an outbreak of e-cigarette or vaping use-associated lung injury (EVALI) cases in the U.S. in August, 2019 has raised many concerns.

ecns.cn (2021-08-05). Comicomment: In origin tracing, U.S. leads a 'blaming chorus'. ecns.cn The COVID-19 origin tracing is a serious scientific issue that must be studied by scientists and medical experts around the world through cooperation. However, some U.S. politicians placed their hope on the intelligence community, trying to answer a science question with political means.

ecns.cn (2021-08-05). Meng extradition case concluding. ecns.cn Huawei Technologies Chief Financial Officer Meng Wanzhou was back in British Columbia Supreme Court in Vancouver on Wednesday for the final stretch of extradition proceedings that could send her to the U.S.

ecns.cn (2021-08-05). Shifting blame reflects selfishness of U.S. ecns.cn Recently, the U.S. has led several countries and media outlets in hyping up the claim that the novel coronavirus was the result of a "lab leak".

Kamal Iranidoost (2021-08-05). Iran lodges protest to IMO over rising rhetoric. en.mehrnews.com Iranian Ambassador to the UK Mohsen Baharvand has penned a letter to the International Maritime Organization (IMO) to protest the rhetoric recently raised against Tehran after suspicious incidents with tankers in Persian Gulf. 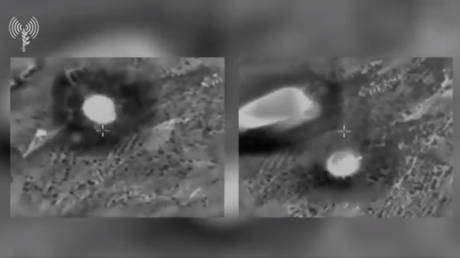 The Israeli Defense Forces (IDF) launched a series of airstrikes on Lebanese territory, calling them retaliation for cross-border rocket attacks after earlier firing scores of artillery rounds in response. | The IDF Video footage has circulated online purporting to show the IDF strikes in progress. | BREAKING…

WSWS (2021-08-04). One year since the Beirut blast: Lebanon's social, economic, and political crisis deepens. wsws.org In recent years, US imperialism, along with Saudi Arabia and France, has piled on pressure as part of its broader campaign to isolate Iran and Syria, widening its sanctions on Hezbollah and Syria, with whose economy Lebanon is closely connected.